You are in year 3 of a 5 year campaign.  Things have gone well to date, the Quiet Phase exceeded goals.  But now, suddenly there has been a slowdown in commitments.  Perhaps a major gift proposal wasn’t fully funded.  Perhaps you received a “not right now” answer from another prospect.  And, perhaps, there are at least 3 other prospects who have yet to respond to your requests.  There seemingly hasn’t been much progress lately.  In these instances, it is not uncommon for people – presidents, CEO’s, Board members, and campaign leaders – to grow impatient.  The pressure can be felt.  “When,” they ask, “will the next big gift come in?”

But, when one steps back and looks at the bigger picture, the campaign is moving along well.  The results still pace ahead of goal, and the activity of visits and solicitations is still occurring at a good clip.  Good things are still happening.  The near-term results just haven’t seemed as positive.

So, why do people grow impatient so quickly?

In part, Geatano Kanizsa’s “Triangle” helps to explain why staying patient is not always easy.  Kanizsa was an Italian psychologist who published on topics regarding visual illusions.  You may have seen his Triangle illusion before. 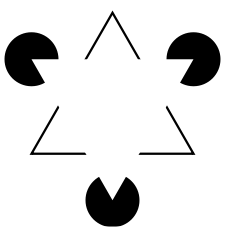 Simply put, to create sense out of our world quickly, our brains make patterns, create shapes (like triangles), and make huge assumptions from incomplete data.  As you look at the white triangle above, you will note that it has absolutely no lines defining it as a triangle.  Instead, our brains, based on our experiences, believe a triangle should be there, so we see one.

When we were hunters and gatherers and we had to watch out for the lion in the weeds, we needed to make these quick decisions.  We needed the ability to make assumptions based on less than complete data.  If we thought we saw a lion lurking, it was better to getting moving before confirmation!  Our quick decisions meant we lived another day.

So, today, as we analyze a million different situations and decisions (almost none of which are life endangering), we revert back to our hard-wired tendencies.  And yes, our brains make quick decisions based on models and patterns that are regularly helpful.  We don’t have to re-learn that clouds mean it probably will rain.  We can assume it based on experience and plan accordingly.

But, when we make assumptions regarding complex issues over a longer time frame (say a 5-year campaign) and based only on a few data points, we can make some serious mistakes.  So, when people start assuming a campaign is in trouble based on incomplete data, our job is to create another Kanizsa’s Triangle for them.  Our job is to refocus their attention not on the incomplete data of a few bad solicitations, but on the progress that has been made to date.  Draw the lines of the triangle for them by communicating the fact that the campaign still remains ahead of goal and that the activity that will produce results in the future continues.  Pretty soon, the new “triangle” they see is more positive.

We are hard-wired at birth to make decisions quickly – based mostly on incomplete data.  This mental skill saved our lives.  But today we can use the same hard-wired mental process to have people “see” another triangle, simply by including more important data.  Part of our work should be ensuring that we are communicating the data that supports people “seeing” the triangle from more than one perspective.