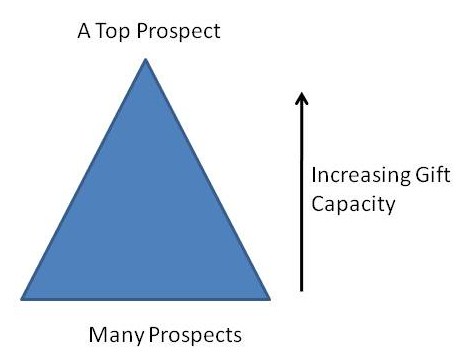 However, when development leaders sort through their database they often find their gift “pyramid” looking more like an “hourglass”:

As this graphic suggests, many major gift pipelines are not as robust at the middle gift levels. Why is this the case? Two reasons: First, the annual fund serves as the donor acquisition program so there are many donors at lower amounts. Second, most organizations know their top donors and spend time strategizing on major gift donors and prospects. But many organizations don’t spend the same kind of time on the cultivation, solicitation, and stewardship of mid-level donors. So, what occurs is an hourglass pipeline. 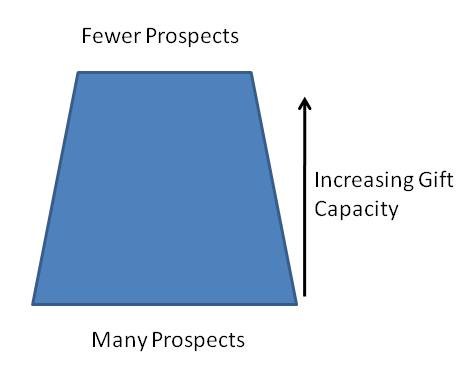 This “pyramid” shows evidence of a strong donor acquisition program (the base of the figure). As you move up the “pyramid” the only drop-off or “donor melt” occurs because some donors simply do not have the capacity to be at your top giving levels. In other words, to achieve this picture, you must have a vibrant mid-level giving program which identifies and cultivates donors from your donor acquisition program. Such a program keeps the middle portion of the graphic filled with prospects. It builds not a “pyramid” but an “isosceles trapezoid!”

What is the result? Simple – Donors at all levels who feel good about their giving to your organization which leads to more top donor prospects.

The Gift Pyramid is ok, but most organizations will take a Gift Isosceles Trapezoid any day. So, what will you do today to build your Trapezoid?